Coup de Gras: @trust to kill
Not: Thank you sir, may i have another and another

Login to post. Membership required.
Jump To
Newest Post
This wouldn't come up often, but it probably does happen more often than anybody imagines. Sometimes, our characters find themselves in situations where they are forced to submit or they just decide to. Situations where they find themselves at the mercy of their captors either willingly or not. I think it would be cool to have an @trust added that would allow someone to one-shot, one-cut, one-smash your character so that execution scenes could be just that and not so...awkward.

The @trust could have followups signalling the player what they were about to do so there could be no surprises. Maybe its not part of the fully-auto @trust system either.

not sure if this breaks any rp opportunities that might be afforded by a longer death. But if you want a quick, honorable death, this could work, right?

I love this idea. Given having to do executions or similar in important scenarios in the past and having be....a bloodbath, pretty much when it should have been a shot to the head, maybe a second for checks, but turned into about 3 clips between all the people. I feel that some situations warrant that, but some of them are ridiculous.

While this may not be an @trust and instead an admin thing to kill you, I love this idea!

So, right now, when you @trust Seven it trusts him for everything. It's like a shortcut for @trust seven to heal or whatever that syntax is. I'd be worried that someone who doesn't understand would @trust the wrong person for the wrong reason and leave themselves open for death.

Can anyone see a solution to that? Because this is a pretty cool idea.

Maybe a separate command that has nothing to do with @trust?

For instance if a person wanted to execute Bob, they might type, "execute Bob". Then, Bob's player would be notified of such (kind of like a request?) and asked if they would allow it.

Sends a message to the player. Do you agree to allow Name to execute you without a fight? Y/N

You have agreed to allow Player to execute you without a fight. Are you sure? Y/N

First player gets the message: Name leaves his/her fate in your hands.

Amazing idea, I would love for this to be implemented, there have been several occasions I have seen that would benefit from the one-off execution style, while the victim is completely compliant, but the situation becomes awkward as you gotta reload a clip or bury a knife in them fifteen times...

A solution to the @trust all thing, is perhaps a code work around that prevents @trust kill to be included in the @trust [Person] command. It would HAVE to be done with @trust [person] to kill, and would have bold red text stating the consequences, and the @trust only lasting say 5 minutes by default until it expires?

Could you implement a system that stops resistance in combat? Something that would start on by default and that you could turn off when you want to be executed, stopping you from 'entering combat' even while someone is attacking you (and therefore somehow in the process removing any defenses such as stances or dodging?

Although after seeing what everyone else has suggested, that sounds more simple.

I could see something like Butako suggested. If the character doesn't agree, you have to do it the hard way. Keeps it separate from Slither's point in the @trust system.
By Meoris at Sep 28, 2017 7:09 AM

That's what i meant about not adding it to the @trust list or giving it follow ups to make it clear to the player what he/she is doing. Maybe that's not possible. How about a command like the escort command that can only be used out of combat?

he sees: Do you really want to execute Bruce?

Bruce sees: Seven would like to execute you. Are you ok with that? (ROFL)

Seven sees: Bruce would like you to execute him now. (HAHAHA) Please enter an emote to describe the execution in ten lines or less.

Badass execution text is sent to the room giving Bruce the chance to see it at least.

Ok. Maybe not this. But i giggled a lot typing it. But a variation of the escort command could work right? it always asks for permission and a command like this could be abused in combat so only out of combat could apply.

Once agreed, you have some time to RP it out, and then maybe re-enter the command to fire off the kill. Maybe have it time out and reset to default state after a set amount of time.

Lethality would be determined by the attacker's @lethal or weather they use the attack or kill command like usual.

This way the receiver can 'just give up' but the attacker can chose how to handle this, kill or KO. Could be interesting if someone resigns themselves to be executed then wakes up a prisoner. Or you could do a two step execution. Insta-KO them then snap their neck.

Could also make it directed (resign aganst NAME) and add confirmation (This would allow you to be instantly killed, are you sure?)

Not sure if the resign option is really a better option then the others though. :-P

No idea how such a simple idea got complicated...lol

While holdback is nice, you're still going to see all the messages about failing to dodge and such. This would be a good place for us to detect you can't defend yourself and give an execution message instead.
By Johnny at Sep 28, 2017 8:54 AM

I think the simplest options is a command, looks like this:

Your character kneels, and bows their head, accepting any fate dealt.

You and everyone in the room sees it as a pose.

Your look_place gets changed to: Bob is on his knees, head bent.

This sets them to a one hit kill from anybody who cares to come by and kill them, as they are completely submitted to a killing blow. This is the classic "soldier's death" stance, both knees, head bent, arms behind the back. "Make it quick."

This eliminates any need for @trust to be involved, which has too much potential to get messy, and also eliminates the need to pick a certain person to kill you. After all, if you're in that state, there's no reason some random ganger couldn't walk up just as easily and snap your pretty little neck.

And it is possible for someone to @holdback 60 and still kick someone else's ass.

For example. Imagine a gang taking on the leader of another gang. They have them outnumbered and the enemy gang leader submits and sets @holdback 60. The winning gang decided that their newest pledge should do the honors. And.. they cant! Because the enemy gang leader is still more powerful that the new pledge.

My +1 was for JMo's idea too. That's simple and functional. I dislike the ooc reminders that come from players forgetting syntax things (i do this all the time with tattoos and such) but it still works!
By fleurtygirl at Sep 28, 2017 9:03 AM

We can't do the 'request' 'response' style of things. It's 'blocking'.

You are about to fight someone.

Person gets a prompt to accept/deny.

While this is happening you do other stuff, like attack them. They try to hold a weapon but the command doesn't go through because they were in a prompt.

You spam @request-execution, forcing them into prompts and preventing them from reacting to the fact that you are posture kamikaze attacking them while they aren't holding a weapon.

In general that style of things is something we avoid almost 100% of the time. We only use prompts when YOU execute something, or when an admin needs to teleport you around and requests you allow it.

There are ways to avoid having to use a prompt but it still leaves this 'request' hanging for the player to never respond to, and that causes weird bugs 5 minutes later when they still haven't responded or if say, five people try to request to execute someone at the same time-- who gets the execution? The last person to request? The first?

The @trust system would be a better place to integrate this, or in a system similar to that.

Needless to say, but any command that you do come up with shouldn't be too simple if it doesn't include a warning. Don't want a new player to accidentally use it and make themselves a one-hit for anyone passing bar.
By Stelpher at Sep 28, 2017 9:12 AM

Needless to say, but any command that you do come up with shouldn't be too simple if it doesn't include a warning. Don't want a new player to accidentally use it and make themselves a one-hit for anyone passing by.*

(Sorry, had to correct it.)

I do think the submit option works great. The person who typed it can be prompted if they are sure. And maybe make it so that if they type any other command it is canceled or something.
By Grey0 at Sep 28, 2017 9:18 AM 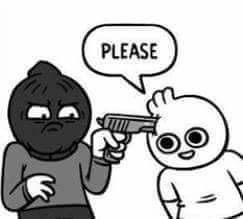