Guns, Science, and Cyberpunk
Why Change is Difficult and This is a Pipe Dream.

Login to post. Membership required.
Jump To
Newest Post
Firearms in Sindome is a topic I raised recently over OOC, to mixed response. My point then, and my point now, was that I find the firearms in Sindome lacking; not lacking in their punch or power, but lacking in their cyberpunk theme. At the end of the day, it is of course my opinion alone, and the purpose of this post is just to show that opinion, and maybe change some minds.

So what makes a good cyberpunk gun? My favorite source of a gritty, grounded cyberpunk world is Ghost in the Shell Stand Alone Complex, so let's start there. GitS does a very good job of juxtaposing high and low tech, as highlighted in this picture, where someone is firing a gun from 1886 next to a man with cybernetic arms. 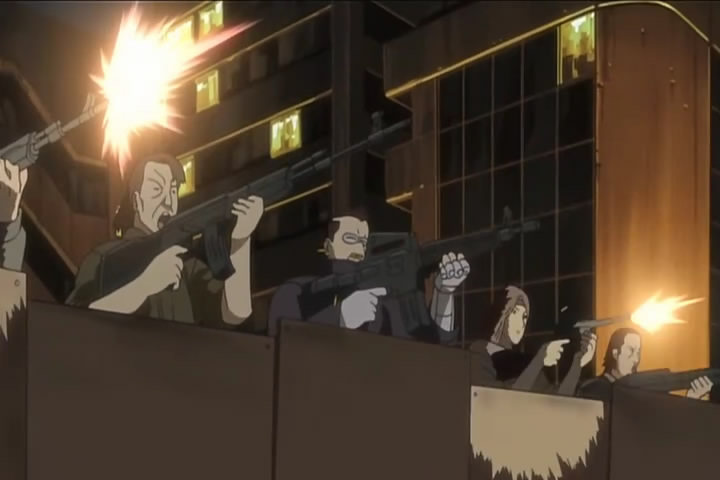 However, it is largely criminals and lowlifes who use more dated weaponry. For the wealthier, and the professional, newer developments are highly preferred. It is even a part of a plotpoint in 2nd GIG that one of the main characters would be so strange as to use an older weapon (a Mateba revolver from our present day). The standard issue weaponry for Section 9 are a Seburo M5 and the Seburo C30, both pictured below. 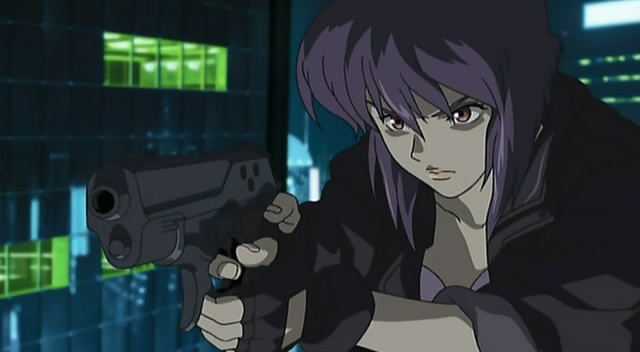 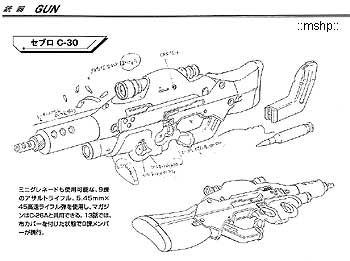 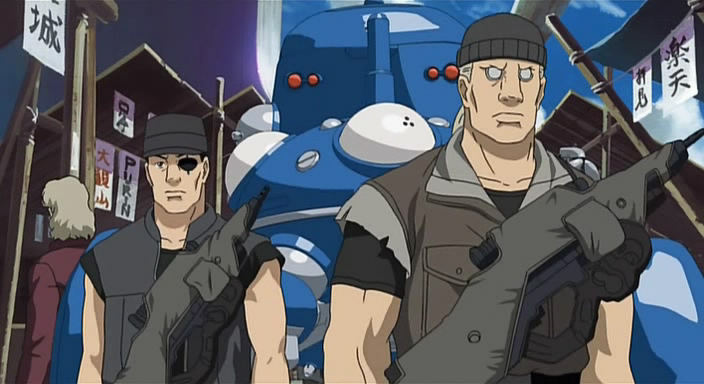 These guns are not crazily advanced, but the important aspect of them is that they FEEL different. They impart the FEELING of cyberpunk, moreso that guns we see in our own time. Their effect is heightened as well when they are juxtaposed with older, real weaponry, the very same sort of juxtaposition that makes cyberpunk so cool. Taking that concept and moving into a much older source, let’s look at Rick Deckard’s gun from Blade Runner. 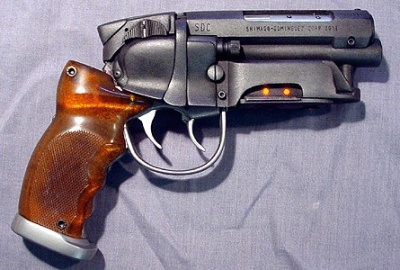 It was a prop cobbled together from real guns, spare parts, and modeling kits. While it is not necessarily realistic or feasible, it accurately imparted the FEELING of cyberpunk, in that it was something familiar, but not. This slight alteration of familiarity is a tactic frequently used for the weaponry in the new Deus Ex games, perhaps most easily described by the following picture. 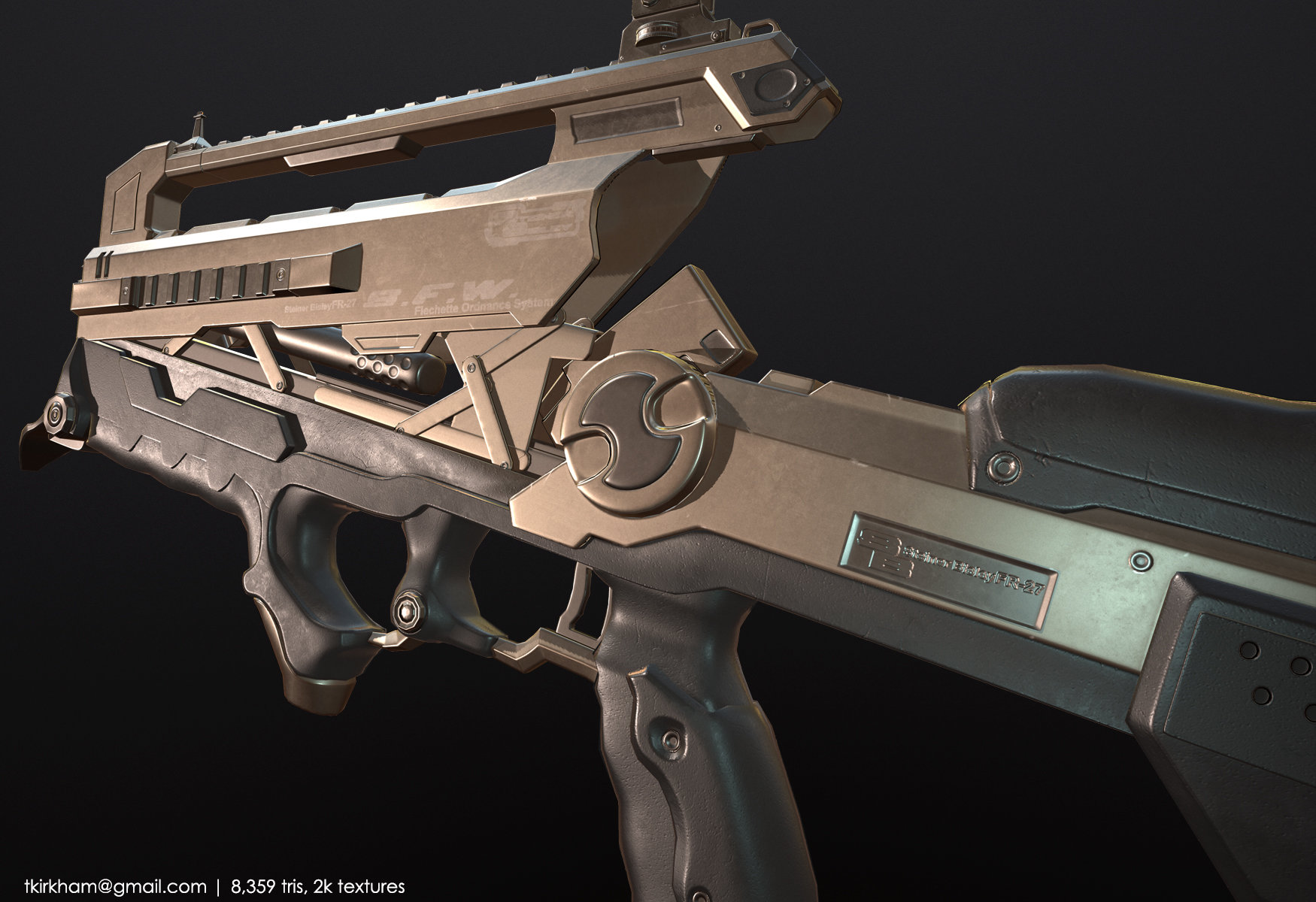 It is a fairly standard looking gun, until it is opened for the reload. With a simple change of the reload mechanics, it implies massive differentiation in technology and mechanics. It makes it feel immeasurably more futuristic and cool, through something as simple as a reload. While obviously we don’t have animations in Sindome, the concept of changing something seemingly simple to impart a much different feeling is the crux of the Deus Ex example. It is this requirement for some sort of change to impart the proper feeling that segways into my next point. When I raised the topic of futuristic firearms, I believe it was Johnny that said, and I paraphrase horribly, “How do you know the guns aren’t made of future materials?” (we were talking about potential advancements). Which is a question I obviously can’t answer, I can only look at the guns and see the same old thing. It is not a thought that satisfies me however, and to be honest I would prefer to have those classic old guns stay the same; my wish is to have the old and dirty juxtaposed with the new and flashy. There is so much room for future tech to be put into the firearms industry, from fancy looking guns like the ones at the end of this post, to new iterations of classic designs. Now, of course I understand that this is at heart a game-like system, that needs to have some sort of balance. Adding in a bunch of new guns could easily lead to feature/power-creep and flood the system with unnecessary doo-dads. That is not my wish, or intention. I should however include at least some sort of tangible idea for this ideas post though, so I put forth a rough proposal. Add in a few high-tech guns in with the new heavy weapons roll out, stuff for the very wealthy and corporations and such. Maybe even just one fancy cyberpunk gun for each weapon class at this point (I am also a wealth of cyberpunk gun ideas if you need someone to nerd out). These guns don’t need to be extremely powerful or have crazy features, just make use of the current technology and FEEL cyberpunk.

Here is the promised eye-candy. If this post is received well, I may also make one about cybernetics before the townhall.

I do like this idea. Besides a few exceptions, many of the guns seem very modern. Even if it is slight description changes to common guns to make them fit the theme more, I would like some more interesting varieties. And, if things ever get even bigger for Sindome, I would like there to be a difference between throwback weapons and new ones. Maybe some weapons with prebuilt trusight, or similar, and then certain weapons that stay old and tend not to be sold in typical gun stores. I have a knack for enjoying old school guns and cars in Shadowrun and other games, for aesthetic and the feel of not being able to be bricked or similar.

There are some very cyberpunk guns in Sindome, such as the disposables and a few others, but I would like a bit of a change. Maybe make the Uzi's seem more...old fashioned, the newer SMGs fit a more futuristic feel for example. Not much changes besides description, but something to make the feel different.

I'd like to see more use of guns against each other in game play. I know we say "style over substance", but what is being done with them?
By Linekin at Jun 9, 2017 6:27 PM