Login to post. Membership required.
Jump To
Newest Post
I have an idea to drastically shorten @stats, and split it's function into another command.

First I have two points I'd like to bring up.

@stats has a lot of detail that isn't, statistical. It's not related to your statistical values on your character.

And @stats has gotten extremely long over the years.

This idea would propose a second command, @details for those smaller character details that don't necessarily need to be on your @stats page.

The last tweak I'd recommend would be to widen @stats by about 3-5 characters. To give a little more breathing room to everything. And to accommodate for the moving of the Personality traits into exactly the space that the face is right now.

I built a mock up of what this might look like. I don't know how feasible some of this stuff is, but it would drastically reduce the line length of @stats, and make it truer to the goal of the command, which is, to display stats. 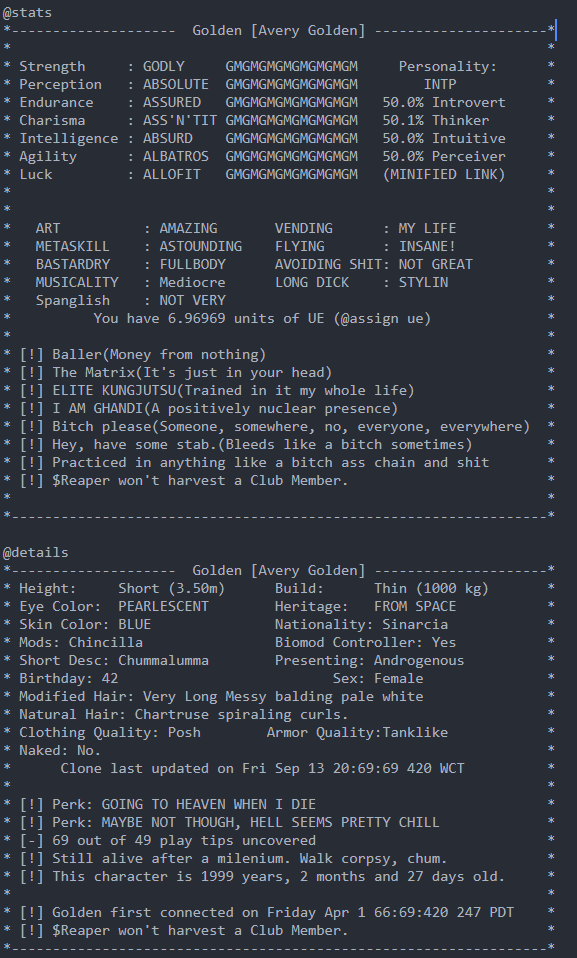 This seems like a great idea, though it would be nice to have the option to show the long @stats (or a different @ command to group it all together).
By goblinfemme at Sep 9, 2020 11:01 PM

It's a single page character sheet by design and looking at your character's, I think it looks about spot on for where I am aiming to have it look.

I am mindful of too many (or too permanent) alerts in the States section and often try to come up with reasons to remove some of them. I think if we do continue expanding the information in @stats from here, we'll need to do so via secondary pages like an @stat-details command. (@details is an existing system to define parts of a room description that can be looked at but are not proper objects you can interact with)

Things like absolute character age really don't belong on @stats, but haven't had a better home.

My personal suggestion is for things that won't change (or will never change) to be cleared out from a "compact" stats screen:

This would leave the compact screen with:

Interestingly, with the letter grades being revealed and stats no longer being hidden, there's enough space next to them for score bars, 1 character per level.

Tangential quality of life suggestion: Order skills by how good you are at them. That way you don't have to go looking for your good ones buried among handfuls of Terribles and Recklesses.

Second observation: There's no way to know what cyber is inside of you if you ever forget. (Though maybe that's intentional so you don't know if you've been implanted with something?)

Anyway, that's all my thoughts! I don't mind @stats the way it is right now, but if beautifying things is on the table, may as well get these thoughts out.

@ynk A side note to your second point, some folk don't know or aren't told, but you can look at your chrome with help cyberware.

I do like this idea though, splitting things to be more compact in @stats, with more details in an @stats-details.