Login to post. Membership required.
Jump To
Newest Post
As vehicle combat and other factors become reality in Withmore, I think it would be themely to introduce futuristic motorcycles which enclose and protect the rider. I envision something that looks similar to the Tron "light cycle," but basically a protective pod on wheels.

Or, instead of new motorcycles, perhaps some of the existing ones could be adapted to provide this protection. Or it could be a new type of modification for motorcycles - get the right pieces added on, and convert any motorcycle into one that protects the rider.

Well, cost could be a balancing factor.

Also, weight - the additional armor would reduce some of a motorcycle's speed and maneuverability.

But you'd get a car for the same reasons you got a car before vehicle combat, etc. became a factor - you want to transport more people than just the driver.

There are multi-person bikes...and things like this generally exist based around car parts. As does personal armor.
By Dawnshot at Dec 13, 2021 7:47 AM

Even if that were the case, it would still be faster than a car as you would not have to wait for traffic (the single biggest reason to buy a bike imo.)
By Waters at Dec 13, 2021 7:47 AM

Yes, there are, but I'd expect a bike like this would be limited to driver only. And if it were done as a modification to existing two-person bikes, it should change that aspect of them so they can only contain one. It would be a pretty cramped space.

I am surprised about all the resistance on this - bikes like this have been a big part of various sci-fi/cyberpunk settings, and I figured it would be on-theme.

Not saying it's not themely but I don't want to see everyone riding these bikes because they have literally no reason to get a regular bike or to get a car when they can have the best of both worlds without any of the downsides. Making the bike slower or more expensive is not really balancing to make you more vulnerable.
By villa at Dec 13, 2021 7:53 AM

I think it's neat. Enclosed cycles are definitely a cyberpunk staple, and yeah they should definitely be limited to one person, but there's no reason you couldn't offer it for a pretty hefty price. Could flavor it as the difficulty of sourcing material light enough and strong enough to be legit armor for something as small as a bike, or something.
By Shieldman at Dec 13, 2021 7:55 AM

Really? I think price could be a huge factor - there are already upper-end bikes that don't see a lot of use because of the price, and most characters opt for the less-expensive models. If such a bike cost more than some cars, that would definitely affect the balance.
By Blackbird71 at Dec 13, 2021 7:55 AM

Adding onto Shieldman; any "armor" on a bike would also likely be less than what a car can carry - lightweight, and not nearly as protective, but better than nothing.
By Blackbird71 at Dec 13, 2021 7:57 AM

I think it's a bit early to be speculating on vehicle combat and the balance of motorcycles, let alone enclosed motorcycles.

Cool enclosed motorcycles have a place in cyberpunk, but I don't feel they have a place here in Sindome. The mono is otherwise what you're looking for.

The rider ejecting on crashes was actually part of what inspired this idea, but I understand if that makes a code complication. Thanks for weighing in.
By Blackbird71 at Dec 13, 2021 9:49 AM

I don't think balance is a huge concern, especially since we're talking about a very high-end sort of thing. It's not like we see everyone driving Holdens, dropships and AVs, right? Not to mention that dodging traffic is such a miniscule thing, I wouldn't think anyone would get a bike specifically for it. People get bikes because they're cheap, primarily, I'd say. As for the drawbacks? It costs an arm and a leg. Just my thoughts. People are acting as if dodging traffic is some game-changing perk.

You know what I think'd be neat? An entry-level bike AV. Something for people who want to start to fly but don't casually have a million chyen to spend. No storage space or very little, slow-ish, one seat. Can be enclosed or not.

Tell me you don't want to fly this cool ass shit 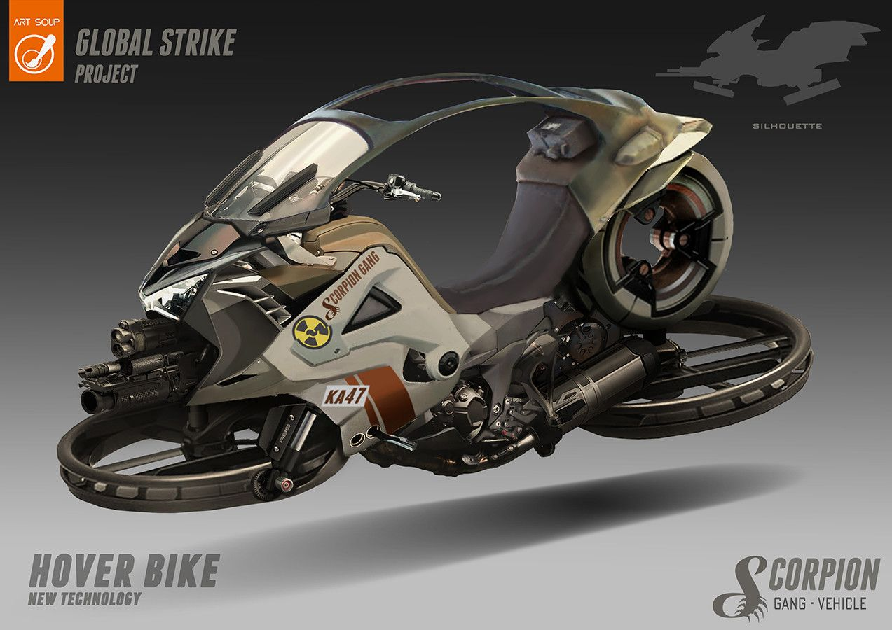