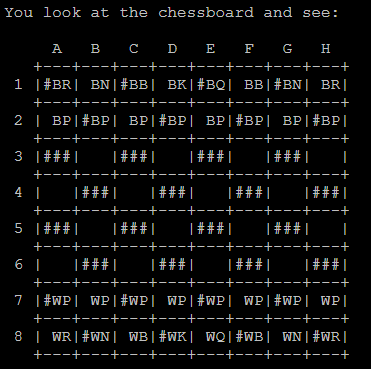 Compare to a normal Chess setup: 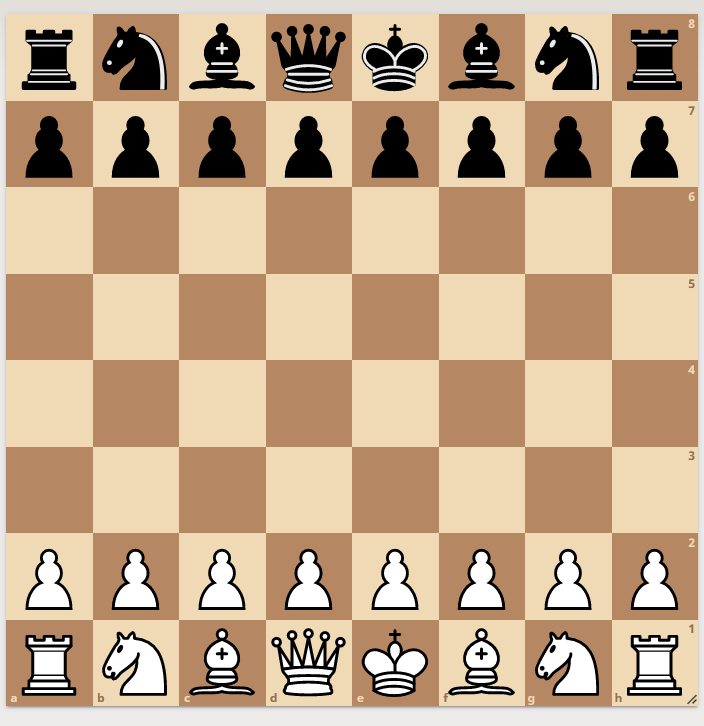 The king/queen are swapped and the board notation is reversed (the White pieces player should have the A1 square at their lower left).

It makes playing confusing and mistake-prone, and I've seen people express that they've avoided playing because of the switches.

Of course, fixing this wouldn't be at the top of any priority list. Sindome isn't about playing Chess. But I've seen more interest in IC play than I expected, so it could be worthwhile if it's a simple fix. Facing a rival over the chessboard could be some RP, and not many people know how to play Go.

Could be intentional to keep people from letting a chess program make the moves for them.

Still, in my eyes the benefits of a correct chess board outweigh the risk.

I agree with Loreley. While I have no doubt that some people might want to try using a chess program, I honestly think that the vast majority won't, and it would be amazing to be able to play chess in character.
By The_Zeitghost at May 18, 2021 6:06 AM

I've bugged it in the past.

However, it literally is to keep people from just using an engine. Which is something that plagues Chess.Com and other sites. If you know how to play, moving the pieces and reversing the board is not that big of a deal.

However, it does bring into the issue of it being a skill that is wholly not stat dependent. I know people who play who win games they likely never should. Because they are good at chess IRL but likely do not have stats to really back that up.

I think I'd rather keep the board as it is and not play Stockfish over and over. I can do that IRL :)

It's trivial to set up a Chess engine to show the best moves for the Withmore Chess setup, taking virtually the same amount of time as for a normal board.

I don't think it's a concern.

I disagree on both points.

It's not trivial. Because, without going into a lot of Chess engine details, by just reversing the pieces, you take away the entirety of the opening theory that the computer bots have pre programmed into a library. It will not find common or "book" positions. Take that away and there are few engines that I can not handily thrash. With those... I struggle against good bots since I'm playing the collective history of Grandmasters at times.

As for how common it is, that is likely due to who you have played and how familiar you are with their stats. I've seen it enough times to notice it. Is it a concern? I don't know, I suppose there is little concern with who wins a Chess game in a MUD... but it is an immersion thing.

Sure, you can play like this. Just like you can write with your left hand, if you are right-handed. And using your non-dominant hand is just as much fun as playing with that board.

The problem with playing against OOC skill does not go away with using a wrong setup. If that is what people are worried about, then there should be an automated way to "play" that pits intelligence and perception (since chess is arguably mostly about pattern recognition) of the characters against each other and determines the winner that way.

And a normal way to play with a proper board for those that prefer to actually play it.

@BlazingCoconut: You claim to be good at chess and you seem to have played it in this game as well. How did you play it to your character's stats? Did you blunder intentionally and repeatedly, if you suspected that your character should lose, based on stats? Or did you so far only play against characters that you suspected to be that much less intelligent than yours and thus always played with your full strenght?

As for OOC level of skill I fall in the 1800-2000ish rating which is someone who gets beat by Grandmasters and beats most other people who play the game casually with no study. I have both played people and watched people play the game several times.

You are correct that fixing the board does not remove the OOC skill component. It just removes the ease of using an engine to play for you. That is something I am for and kind of support even if it makes playing a little strange. If you play on Chess.com, you end up playing people who use Stockfish all the time. You can tell because they play with 99%+ accuracy across multiple games. I would prefer that not happen here... but since we don't track ratings, it's probably not as big of a deal.

It makes things harder on people who are newer to the game, learning to play chess, relying on mental models that depend on a normal chessboard. It's not about Stockfish for the vast majority of non-cheating players, it's about how they learned to play the bare basics of chess, which is always on a correctly positioned board.

Please fix the board.

Is there any way to incorporate this game within the Grid, as compared to the the text of the world? This would allow a graphic style chessboard I'd think so there could be no confusion. That anyone would actually sit and play physical chess when they could link up and do so through the grid seems silly to me.
By Damarung at May 21, 2021 2:15 PM