Login to post. Membership required.
Jump To
Newest Post
OK so what if you had a little one use super illegal/restricted electromagnetic gizmo you could zap a restrained, trusting, or unconscious person with (you could also use it on yourself) that would make their SIC go offline for like five minutes as though they were in a dead zone? I think that would be aces and make life a lot easier for the kinds of people who need someone to shut up for a minute while they drag them somewhere unpleasant.

If there are more kidnappings etc. then there will be bigger better scenes and fewer silent necksnappings. Plus I'm sure you could get up to all kinds of shenanigans that I haven't described here (please do not go into detail about game mechanics).

Let me overload it by zapping a dude six times in a row so his chip explodes and I get covered in chummer juice
By Ryuzaki4Days at Sep 6, 2019 10:27 AM

I was under the impression there already was a device in game that did something like this?
By kroack at Sep 6, 2019 10:31 AM

There are a couple of pieces of gear that can do something like this, but they are effectively useless for kidnapping people for a variety of reasons.
By Vera at Sep 6, 2019 10:32 AM

Let's stay well away from the mechanical nitty-gritty of how that stuff works. I am just focused on the fact that if Joe Baka wants to send me a message and he can easily shoot me in the face and put me on the ground, he should not be so incentivized to just necksnap me and take my gear.
By Vera at Sep 6, 2019 10:34 AM

Spending several hundred thousands on the tools needed to do something similar to this to kidnap some rando too is about the equivalent of top gearing an entire crew to go hold up Burger King.

Though there ARE tools available, they are not very practical.

I've thought this could make for black market chrome, before.

It could be taxing to use, like a flashboost, but emit SIC jamming for everyone in the room, including you, for a short time.

Blacking out everyone's SIC with no skill check is a big deal. My idea involves taking someone who has already had a chance to fight back but failed to win and making it so they can't broadcast the who and what as you drag them somewhere off-signal to do your dirty work.

Disposable would mean they wouldn't be the be-all end-all but they could be cheap enough to want to use for one job. 10k to kidnap someone instead of killing them sounds like it might be worthwhile to me.

Ahh, I lost my post, but that sounds pretty reasonable. There's (AFAIK) already a consumable item in the game that temporarily disables SIC, but I think it's for a very short duration, and it has other effects as well, and it can be countered with slightly upgraded chrome.

Making something that costs more and just targets the SIC alone seems like it would be relatively balanced. It might make topside hits more manageable, too.

I cannot take part in this thread as I am clearly biased in favor of this idea.

Can we have this? Pwease?

As much as I love it, when you have this amount of advantage over someone, do you really need even more? This will give even more power for fighter vs non fighter characters, as they now can get knock out, zapped and not given chance to call for friends.
By Marleen at Sep 6, 2019 3:21 PM

Why not a device that scrambles around the words of SIC thoughts in a given room? 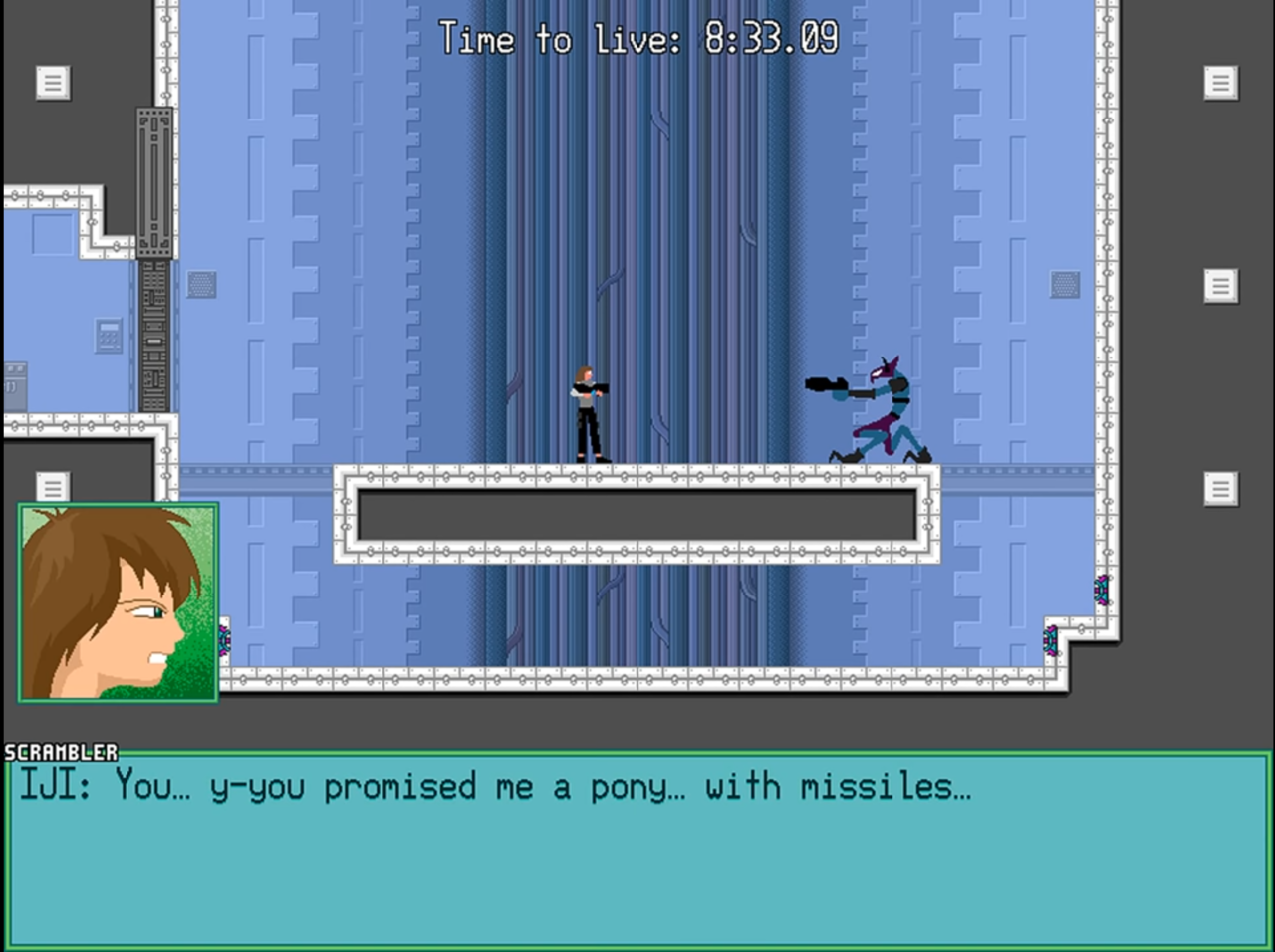 Wouldn't be much different than pubSIC normally, I guess.

"As much as I love it, when you have this amount of advantage over someone, do you really need even more? This will give even more power for fighter vs non fighter characters, as they now can get knock out, zapped and not given chance to call for friends."

In the past I have frequently wanted to kidnap someone to do something interesting to them, but the complexity of moving a target from point A to point B while they were screaming for help meant that more often than not it was easier to just necksnap and take their gear. The risk/reward on a drawn-out scene versus thirty seconds of combat and a quick and dirty necksnap was REEEEEALLY skewed in favor of the latter.

In my opinion this wouldn't make combat-focused characters more powerful since it would have to be used after the target was already beaten. It would give them an opportunity to do something more interesting for both parties than redscreening the victim and walking off with the loot.

TLDR its extremely easy to murder someone and instantly get all their stuff and extremely hard to kidnap them. Something like this would leave the current balance intact since there's still a fight beforehand, but it'd give the winner the option to turn it into more RP.

Oh also don't get it twisted, low to middlebies shouldn't have easy access to this tech, if that's what you were imagining. I'm talking about something corpsec or WJF or whoever breaks out when they need to quietly pluck someone up out of the Mix, that kind of thing.
By Vera at Sep 6, 2019 7:46 PM

I like this idea but think it should be a decker thing. How about adding junction boxes for SIC in the sewers? A skilled decker would be able to target and disrupt a specific SIC ID provided it was in the sector as the junction box.
By ReeferMadness at Sep 6, 2019 7:47 PM

Kidnapping someone like that is hard because you can then extract all sort of info from them, so not having to worry about logistics of signal is making it easier. There is that point for less neck snapping, but I can't imagine that after doing whatever you wanted to do with them, you won't kill them if you would otherwise. So with use of that device they are still dead, but also have away encryption keys, door codes, and were robbed off chance to even call for help.

I don't see how is that, ultimately, better experience, and not a big of combat vs non combat.

Except that can be shorter than it takes to compose a message, and that is assuming they got attacked in signal (rookie mistake), and now with the zapped that is the only window they had. Meh, kidnapping is hard as it has massive upside, I don't see why it should be made even easier.
By Marleen at Sep 6, 2019 11:48 PM

LOL nobody gives up door codes or anything useful when they get kidnapped. There is a torture thread in game problems and complaints where tons of people argue why their character is torture proof and the GM’s policy is not force anyone to give up anything and to just make sure they rp “pain”. Been there with multiple people, get the exact same results each time, so I am just saying that aspect of objection is unrealistic. Sure, there are other things you can accomplish with a kidnapping, but info extraction that will lead to the loss of their belongings? Pffft. Good. fucking. Luck.

I also don’t see something like this happening for many ic/mechanical reasons too. I would advise you have someone teach you the ins and outs of a good kidnapping or just have enough rep to where you can kidnap someone and there’s not a damn thing anyone can do about it.

If people think that any character is torture proof, that's sad and 100% unrealistic and results of being tortured last way past the end of the ordeal.
By Marleen at Sep 7, 2019 6:50 AM

I actually think they last long enough. However, if characters with the explosives skill could modify the fuse on nades' that would make things a lot easier.
By Necronex666 at Sep 7, 2019 10:16 PM