256 Color Support Is Coming
You should test your client now

Johnny and I spent Fri/Sat/Some of Sunday working on bringing full xterm 256 Color Support to our dev server. Meph and Glitch helped us with naming 256 colors as well, which was tedious and thanks to them.

What we want at this point is for you to connect to our dev server welcome page and test your clients support of 256 colors!

After you see the login screen just type: @256-colors

You'll get a display with lots of colors, or your client will barf up a bunch of crap. If your client doesn't support 256 colors, it may be time to look for one that does. VMOO is an issue, it doesn't support even the colors we have now very well, let alone 256 of them. We recommend you switch to the Web Client.

Many clients like BlowTorch, Mukluk, MudRammer, MushClient, and others, do support this and have for a while.

Feel free to post the results of your test here, and feel free to include screenshots of your client succeeding or failing. Make sure you post what client you're using!

We're super excited to add this color support to game, and for those of you who want to stick with old clients that don't support these colors, we'll still have an ANSI (color) free experience you can turn on. 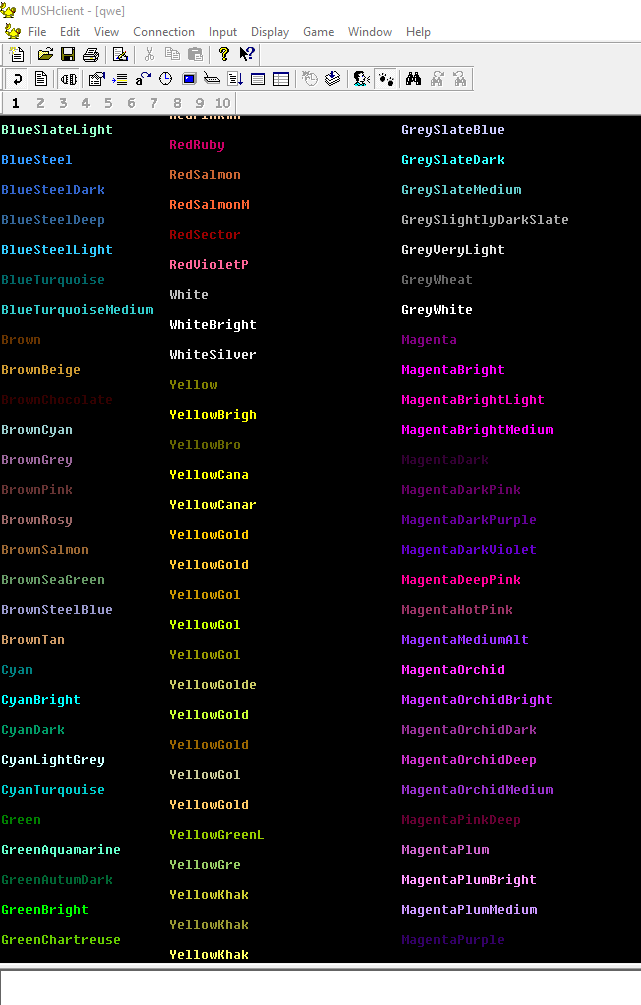 The obvious choice for favorite in that list is BlueSteel. Even if you don't like the color.
By alkaline at Jan 7, 2019 9:09 AM

Mudlet looks to work fine. Also an all-around great client IMO, I like it's color settings for changing how certain colors in the game are displayed in particular. 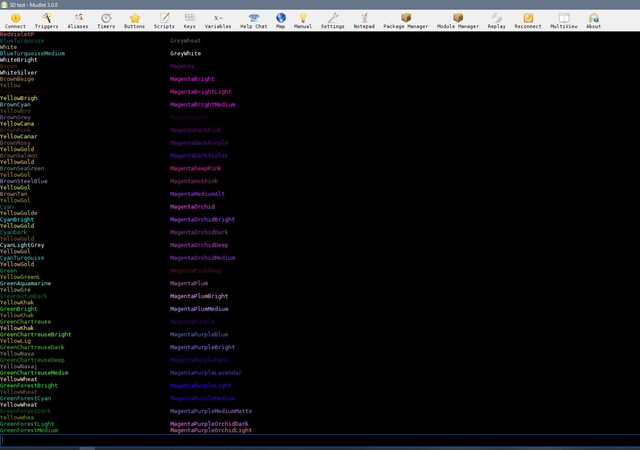 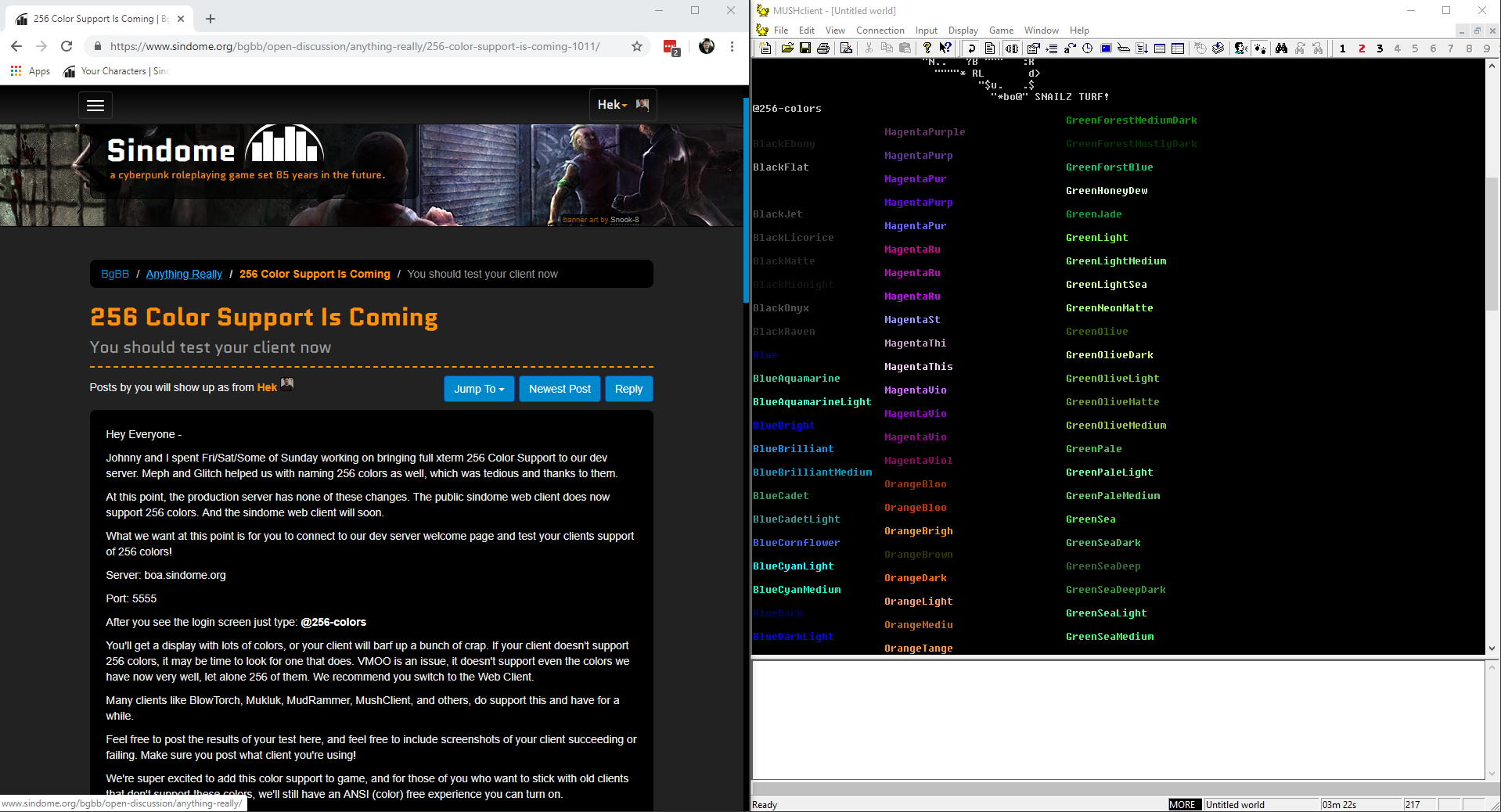 Oh no, I wasn't commenting on the naming conventions at all, I'm just hyper excited. This looks beyond amazing for painting, tailoring, etc.
By Crooknose at Jan 7, 2019 2:15 PM

I wouldn't expect customized channel colours. We already don't have those.
By alkaline at Jan 7, 2019 11:36 PM

Not to semi-derail the thread, and I only have experience with Mudlet as a client (I haven't touched Vmoo in years).

Anyway -- it takes a little reading into the language Mudlet's client-side triggers use (lua) but you can set them up to trigger on certain things and re-colour lines, which is just...so nice. I have sort of ambiguous issues with reading text, and straining to pick things out when text is moving rapidly or when all of the text is the same colour (looking at you, SIC) often triggers vertigo or migraines for me. Honestly the game was frequently awful or unplayable to me until I figured out ways to use triggers to de-clutter the colour on the screen (eg, re-colouring encrypted SIC traffic my character doesn't have access to, highlighting incoming private SIC messages).

On a side note, these triggers can also trigger local sound files to play, which I've nerded out using just because I think it's fun and it adds immersion for me (triggers for the sounds of levs arriving, phones ringing...).

Just a reminder to always poke at your client of choice and see what it can do to enhance your experience, but of course make sure to read the @rules carefully, especially when it comes to macros / triggers / etc. (none of mine perform any actions, for instance).

I am curious about how you re-colored SIC traffic.

Did you use regex to pattern match things? e.g. looking for the $ in keys?

I haven't used anything but the web client in a long time, but all the clients I ever used (VMOO, zMUD, SimpleMu) let you recolor things...

Also, the webclient does offer some extended color support in the options, you can swap some stuff. Though, with this new color support maybe will will make it more customizable.

In the end, if you know CSS and use the webclient you could really write your own stylesheet and get a chrome addon or something that replaces the CSS you want to replace!

I swear most editors offer you the ability to recolor things though...

Nah, nothing that sophisticated. Okay, so in case anyone else was curious about doing something similar themselves I thought I'd snip a couple screenshots showing how I've done it. Again, I only know how to do it with Mudlet's triggers, and there are probably better ways to re-colour SIC stuff, and it's also very much a preference thing, but it's what I've been doing for a while now and it works for me, so here goes. I hope the screenshots show up well enough to be helpful.

The first screenshot is how I setup a trigger to handle encrypted SIC traffic that my character isn't keyed into. It shows a handful of fictional SIC encryption keys in the top portion (this is, as you'd expect, the triggering text on each line). In the bottom box is the little chunk of lua code that runs when triggered -- in this case, selecting the triggering line, re-colouring the line, then de-selecting it and returning the default formatting afterward. In this case, I'm opting to have it simply re-colour such lines from the normal SIC red to a dimmer grey, making it much easier on the eyes and easier to parse more important content around it.

Because I don't want to format every line that starts with a $ character this way, unfortunately the only way I saw to get this running is to manually add every $key to the trigger list as I encounter such keys in the game. This was a bit tedious to start, but after just a couple days it was pretty much good to go. I generally only have to add new keys once every couple days at this point as people generate new ones, and it takes two seconds -- feels like a small price to pay for the QoL improvement. I might be stupidly missing a better way to handle this. 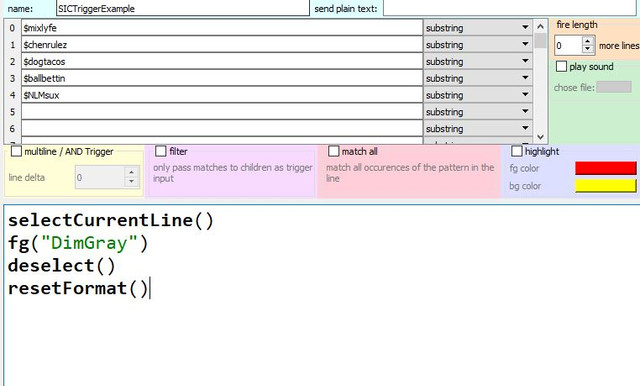 The second screenshot shows a kind of general 'personal highlight' trigger I use. It covers highlighting incoming private SIC messages, phone conversations, and incoming xhelps for good measure. You'll notice a small box to the right with 'Play Sound' and 'Choose File' options. This is where you can have the trigger play a local sound as well. I think only .wav files work (I've tried .mp3s and they didn't, if I recall). I've had great luck using www.freesound.org, using search parameters to search by shortest duration first. There are all kinds of noises to indicate messages, phones ringing, doors locking, levs arriving, shots being fired, grunts of pain...a million possibilities.

Finally, the third screenshot shows a way you can use a kid of general 'keyword' trigger. You can fill the trigger words with names or important words to your character -- in this example, I want to highlight any mentions of my character's name, Chummer1, so it stands out say, in a busy scene at a club with a lot of conversations going on at once so I don't miss something important. I also want to highlight the name of all my character's many girlfriends, Mona1, Mona2, etc. so they stand out in the same situation, or when maybe when I run 'who'. I also want to highlight 'runner' and 'fire', because Chummer1 is always on the lookout to get work as a runner, and is also a volunteer for WCS, or something. You'll notice I don't want to highlight the whole line in this instance, just those words, so I don't use that same lua code block, I use the option below the sound option to highlight the triggered text in purple (foreground colour).

Oh! And for the colour options in the lua codeblock, you can use any of the colors here: https://forums.mudlet.org/viewtopic.php?t=138 There's another full table on the wiki somewhere but I can't find it at the moment, sorry.

Whew, sorry for the wall of text, and again for pulling the thread off track. Hope this is helpful to anyone wanting to tweak such things as well, it took me a bit to figure out but made the game -much- more comfortable to play and was satisfying to figure out.